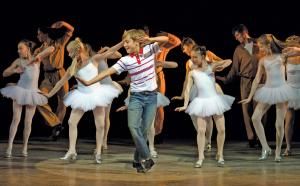 Tickets are on sale now for this year’s Kids Week performances through the whole month of August. The month-long theatre initiative, run by Official London Theatre, offers free tickets to children aged 16 and under, when accompanied by a full-paying adult, with two extra children’s tickets available for purchase at half price, per transaction.

Kids Week, marking its 18th year this summer, has a line-up for 2015 featuring 45 London shows, including West End favourites Matilda The Musical, The Lion King, Billy Elliot The Musical and War Horse, as well as newcomers such as Bend It Like Beckham The Musical.

As well offering tickets to performances, Kids Week also runs a series of show-related activities and workshops open to Kids Week ticket holders for that day’s performance. Activities for 2015 include: a puppet workshop from The Lion King, discovering how Jacqueline Wilson’s Hetty Feather made the journey from page to stage, learning comedy improvisation from the team behind The Play That Goes Wrong, and a Billy Elliot the Musical-inspired dance class with one of the current Billy Elliots performing in London.

Shows included in this year’s Kids Week 2015 are:
(For ages three and up)
Aliens Love Underpants
Ben And Holly’s Little Kingdom
Dinosaur Zoo
The Gruffalo
The 3 Little Pigs

(For ages five and up)
Billy Elliot The Musical
Charlie And The Chocolate Factory
The Commitments
The Curious Incident Of The Dog In The Night-Time
The Lion King
Hetty Feather
Horrible Histories: Barmy Britain – Part Three!
I Believe In Unicorns
Let It Be
Lord Of The Dance: Dangerous Games
Mamma Mia!
Matilda The Musical
Les Misérables
The Phantom Of The Opera
The Railway Children
Sinatra: The Man & His Music
Stomp
Thriller Live
War Horse
Wicked
The 39 Steps