Sir Tim Rice, known for his award-winning collaborations with Sir Andrew Lloyd Webber, has been awarded an Honorary Doctorate of Arts by Leeds Beckett University for his contribution to the industry. Having co-written renowned musicals such as Joseph and the Amazing Technicolor Dreamcoat, Jesus Christ Superstar and Evita with Lloyd Webber, as well as working on Walt Disney film soundtracks The Lion King, Beauty and the Beast and Aladdin, it’s no wonder Rice is considered an asset to the arts.

After receiving his award, Rice said: ‘I am very honoured to be given any award at all in any circumstance and one from such a distinguished university is terrific.’ Vice Chancellor of Leeds Beckett University, Professor Susan Price, said of Rice: ‘[he] is an inspiration and prolific figure in the history of British music and theatre. It was a delight to welcome him to our Headingley Campus and to recognise his enormous contribution to music and the arts.’ 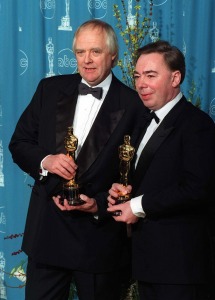 Rice and Lloyd Webber with their Academy Awards

Though he originally planned a career as a solicitor, Rice became a management trainee at EMI records in 1965, and not long after that he met fellow struggling songwriter Lloyd Webber. Of his career, Sir Tim said: ‘I never really thought about going into the theatre world when I was young, I didn’t know much about the theatre but I knew a little bit about musicals from my parent’s record collection. It was through meeting Andrew Lloyd Webber really. I was writing pop songs, he was trying to write theatre stuff, our paths crossed and we decided to go for his idea, which was very sensible because we would never have been better than the Beatles or the Rolling Stones but there was nobody doing what we were trying to do.’
An indisputable genius, Rice was knighted for his services to music in 1994, boasts a star on the Hollywood Walk of Fame, and has received top industry accolades, including Academy and Tony Awards.
His acknowledgement of recent cuts to arts funding came through in his advice for graduating arts students: ‘You’ve got to be quite enthusiastic about your job, there’s no point in doing something you don’t like.’ He added: ‘If you are genuinely interested in the arts, even if you don’t think you have an incredible basic talent, there are so many things you can do that aren’t actually being an artist; you can be behind the scenes which doesn’t involve getting up on the stage or painting. It’s the people behind the scenes that make the most money.’

Error: Twitter did not respond. Please wait a few minutes and refresh this page.