The EBacc, or English Baccalaureate, is due to make a return this September after it was scrapped in 2013 to make way for ‘a more balanced and meaningful accountability system,’ as previously proposed by Michael Gove, former Secretary of State for Education.

The EBacc is set to affect students nationwide

Intended to further control compulsory GCSE subjects in state secondary schools, the plan features an alarming lack of acknowledgement of the arts. Previously a method for ranking schools on a league table depending on pupil merit in ‘core academic subjects’ (maths, English, sciences, languages, and history or geography), the EBacc excludes arts subjects altogether, signifying that the Department for Education does not consider them reliable indicators of a good education.

Despite an increase in students taking arts subjects since the plan was overturned two years ago, the Department for Education has returned to introducing a compulsory list of GCSE subjects, with current Secretary of State for Education Nicky Morgan confirming that ‘every child starting in year 7 in September will be expected to study core academic subjects that make up the EBacc right up to GCSE.’ This is in spite of Christine Blower of the National Union of Teachers describing the EBacc as a ‘narrow vision for education which constricts the curriculum and fails to meet the needs and aspirations of many young people.’

Following the announcement, cross-sector campaign Bacc for the Future is fighting to make the Department for Education rethink its motives and ensure that creative subjects are equally accountable in school rankings. They argue that there will be less encouragement and support around the arts, ultimately having a knock-on effect on the creative industries, which contribute £76.9bn to the UK economy every year. 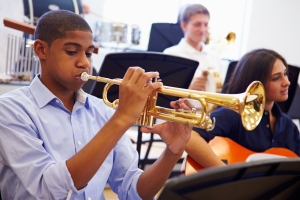 Bacc for the Future is supported by a range of arts figureheads, including Cog Design founder Michael Smith, who said that the ‘marginalisation of arts subjects indicates a lack of understanding of their vital role in our education ecology.’ Similarly, Neil Constable, Chief Executive of Shakespeare’s Globe said: ‘The Government proudly cites the UK creative industries as world leaders, one of the fastest growing sectors, providing £8.8m an hour to our economy. Yet it proposes to impose the EBacc on schools which will starve the industry of fresh talent, stunt the growth of our young people and make us all the poorer.’

The campaign aims to raise awareness surrounding the importance of arts-based subjects, including music, drama and art. Indeed, as pointed out by Rachel Tackley, Director of the English Touring Theatre: ‘Sophocles said: “Whoever neglects the arts when he is young has lost the past and is dead to the future.”’

David Cameron’s final cabinet reshuffle before the 2015 election has seen some significant changes.

Michael Gove, who had served as education secretary since the 2010 general election, will be taking up the position of Commons chief whip. According to a tweet posted by David Cameron earlier today, Gove will now have ‘an enhanced role in campaigning and doing broadcast media interviews.’

Born in south London, Morgan attended Surbiton High School before studying law at St Hugh’s College, Oxford. She was elected MP for Loughborough in 2010, appointed assistant whip in 2012 and economic secretary to the treasury in 2013.

In his time as education secretary Michael Gove has been responsible for the biggest shake-up of England’s school system for decades. He has constantly faced opposition from teaching unions, and general secretary of the National Union of Teachers Christine Blower has stated that the union will be looking for a change of direction from Ms Morgan.