Following the controversial cancellation of the National Youth Theatre production Homegrown amid concerns it would promote radicalisation, theatre directors, actors and writers have taken to an open letter to express their disappointment and confusion.

The letter, published in the Times, is part of an ongoing battle to get to the root of the sudden cancellation of a play intended to break down the barriers of censorship. As explored in two previous Teaching Drama articles (4 June and 18 August), the play, which explored the reasons behind homegrown radicalisation, was due to open on 12 August, but was pulled just days before by NYT.

Director Nadia Latif and writer Omar El-Khairy had been forced to relocate the production after Tower Hamlets council informed them the school venue was inappropriately close to the Bethnal Green school attended by Shamima Begum, Amira Abase and Kadiza Sultana, who are thought to have fled to Syria to become jihadi brides earlier this year. Following that, Latif and El-Khairy were warned that Metropolitan Police were considering planting plain clothed officers in the audience, though this is denied by the Met.

The open letter, which can be seen below, is the beginning of a larger argument against theatre censorship, a subject we will be exploring in our Autumn 2 edition of Teaching Drama.

Why was the National Youth Theatre’s production of Homegrown, a new play about radicalisation, suddenly cancelled?

Sir, The abrupt cancellation of the National Youth Theatre’s production of Homegrown is a troubling moment for British theatre and freedom of expression. The play seeks to examine radicalisation and disaffection among British youth. Its cancellation serves only to shut down conversation on these important issues. We fear that government policy in response to extremism may be creating a culture of caution in the arts.

We are deeply concerned by reports that the NYT may have been put under external pressure to change the location and then cancel the production. Police, local authorities and arts organisations have a duty to respect and protect freedom of expression — even, and most especially, where they disagree with the message or find it controversial.

We urge the NYT to give a full account of what led to the decision, and hope that a way can be found to stage it so that the young voices involved can be heard and the production can be judged on its merits.

A brand new play, due to open on 12 August, was pulled by the National Youth Theatre just days before the first night. Homegrown, which followed the lives of three Bethnal Green girls believed to have left school to travel to Syria in February, was directed by Nadia Latif and written by Omar El-Khairy, both of whom claim NYT were aware of the subject of the play from the start. 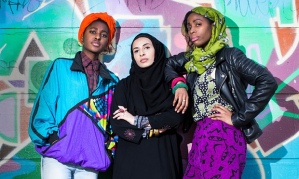 The cast of Homegrown were distraught by the news (Credit: Helen Maybanks/National Youth Theatre)

The production, which was to feature a 112-strong cast between the ages of 15 and 25, was originally supposed to be performed at Raines Foundation Upper School, less than a mile from the Bethnal Green school attended by Shamima Begum, Amira Abase and Kadiza Sultana, the three girls said to have journeyed to Syria to become jihadi brides.

Latif and El-Khairy experienced their first hurdle in June when they were forced to relocate to UCL academy in Swiss Cottage after Tower Hamlets council expressed concern that the subject matter might be ‘insensitive.’ A spokeswoman for the council added: ‘The school was not aware of the subject of the play when they agreed to lease the premises. Once they became aware, they decided that it would not be appropriate to rent their premises to the National Youth Theatre.’

Following the move, which affected the site-specific nature of the play, Latif and El-Khairy claimed that in late July they were warned that Metropolitan Police wanted to see a copy of the script and were considering planting plain clothed officers in the audience. The proposition came as a shock to the pair, with El-Khairy adding that ‘we don’t know where that came from or who led the conversation.’ Conversely, the Metropolitan Police deny any involvement with the play or intended venue.
Despite previous difficulties, the cast and crew were looking forward to a ‘kaleidoscopic exploration of the treatment of homegrown radicalisation,’ as put by Latif, but the pair were emailed by NYT on the Thursday before it was due to open and the cast were informed on the Friday morning.

While NYT has refused to comment on censorship, El-Khairy said: ‘Voices have been silenced here, there is no doubt about that and I just feel like in order to make the decision to cancel it, something very extreme must have happened.’ Some of the young actors scheduled to star in the show took to social media to voice their distress, with David Hall Tweeting, ‘I don’t know how anything can ever change when we are too scared to say the things that need to be said.’

You can view our previous story about the release of Homegrown here: https://wordpress.com/post/25538237/1551/ 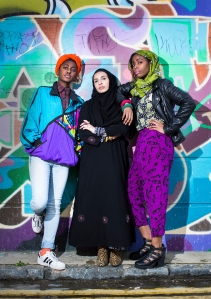 A brand new play inspired by news earlier this year of three Bethnal Green schoolgirls’ journey to Syria to join militant group Isis will feature among the National Youth Theatre’s new season. Homegrown, created by director Nadia Latif and writer Omar El-Khairy, explores the implications of radicalism and extremism on people and communities behind the headlines. The site-specific production, featuring a huge cast of 113, will be performed at Raines Foundation Upper School in Bethnal Green in August.

NYT returns to the Ambassadors Theatre this autumn for its third West End rep season featuring a company of sixteen 18-25 year olds. The season is set to include: an adaptation of Emily Brontë’s Wuthering Heights from Stephanie Street; a production of Tom Stoppard’s abridged version of The Merchant of Venice for schools; and new play Consensual, exploring teenage hormones, teacher-student relationships and the UK’s age of consent, written by Evan Placey – the playwright behind Girls Like That and Pronoun. Placey’s new play will be the focus of a Sky Arts documentary this summer, which will follow cast and crew as they develop Consensual.

Evan Placey’s Consensual will feature in the NYT’s West End rep season and will also be the focus of a Sky Arts documentary this summer (Credit: Helen Maybanks)

At the launch of the new season, NYT’s artistic director Paul Roseby said: ‘This season will celebrate the diversity, vibrancy and talent of Britain’s youth, with fearless new voices. Much has been said about the current challenges young people from disadvantaged and “diverse” backgrounds face trying to access our industry. We are the only company in the UK putting brave young talent on the West End stage in front of large audiences in a season of this scale.

‘I call on those concerned about access to do something about it by supporting the National Youth Theatre’s free opportunities. They are accessible to all, empower talented young people to learn on stage in front of an audience and lead to professional employment in the creative industries.’

Homegrown will run at Raines Foundation Upper School, Bethnal Green from 12–27 August; NYT’s West End rep season at the Ambassadors Theatre runs from 18 September to 4 December. For more information on these productions and others among the NYT 2015 season, visit www.nyt.org.uk.

Paul Roseby is the chief executive of the National Youth Theatre

Speaking at the Artsmark conference in late October, the chief executive of the National Youth Theatre was reported by The Stage as saying that drama at GCSE has ‘no relevance’ and that ‘we don’t need drama on the curriculum in such a formalised way.’

Roseby suggested that drama could be integrated into other subjects rather than continue to exist as what is perceived as a ‘very soft and easy’ stand-alone subject. He said: ‘You and I know it’s not, but the perception of it is, and that’s the battle.’

He said: ‘I would love to see schools become more like creative hubs and revolutionise the way we learn. They would create formulas and ideas that would stimulate subjects by actioning stories – Alan Turing, for instance, or Marie Curie, or re-enacting the cabinet war rooms. It’s taking the practical side of what theatre is and applying it to all subjects.

Neelands said Roseby’s comments were ‘not a helpful suggestion’, continuing, ‘It would be the end  of drama in schools, frankly. If you don’t have it at GCSE, you’re pretty much saying that it doesn’t have any importance’.

Following the publication of Roseby’s comments in The Stage, the chief executive has taken to Twitter to clarify what he meant, saying: ‘In my speech I called for more drama in schools not less [and] enhanced role for drama teachers – question over GCSE format [and] it’s perception.’

Subscribe to Teaching Drama as a print or digital edition now for more news, features and information. Single issues are also available in print and digital from just £2.49.

A grant of £200,000 has been given to the National Youth Theatre (NYT) by the Arts Council to ensure the charity’s future is secure. NYT has struggled to meet this year’s fundraising targets like many theatre companies and arts organisations.

An Arts Council spokesperson said: ‘NYT has seen unprecedented growth in the last year, but unfortunately this has not been matched by its income, resulting in some financial difficulties for the charity.’

‘In recognition of the excellence of the work and importance of the NYT both to young people and the theatre sector as a whole, we have awarded a grant of £200,000 to enable it to meet current financial commitments.’

The Arts Council made it clear that this ‘extraordinary grant’ would be ‘conditional’, based on the changes that would need to be made to NYT’s operation to make it financially sustainable.

The National Youth Theatre was established in 1956 and claims that it was the ‘first youth theatre in the world’. Alumni include Helen Mirren, Colin Firth and Daniel Craig.

A spokesman for NYT said: ‘NYT, like many arts charities, is operating in a challenging economic climate and is currently experiencing some financial constraints. The Board and management are working closely with NYT’s major funders, including Arts Council England, to resolve these issues.’

The spokesman also noted that any students involved in any NYT activities this summer had no reason for concern about the developments: ‘National Youth Theatre’s summer acting and technical courses will not be affected by the current situation in any way. We’re looking forward to welcoming 500 new talented young people, from across the country, into our company this summer.’