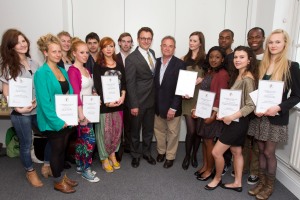 The Society of London Theatre (SOLT) has awarded this year’s Laurence Olivier bursaries to 13 students attending drama schools across the UK. This year’s scheme saw £55,000 donated to drama students entering their final year of training.

SOLT president Mark Rubinstein said of the applicants: ‘Following a highly competitive audition process and a remarkable display of ability, our 13 winners have been chosen. These bursaries allow the students to concentrate on their critical final year of studies by easing the financial pressures of drama school. I am looking forward to seeing them all on West End stages very soon.’

Grants range from £1,000 to £7,500 and are awarded by a panel of judges from the industry. Each year principals from selected drama schools from around the country choose two students to be put forward for the bursary prize. All applicants then audition in London’s West End in front of the bursary judges. The panel is headed by West End producer Lee Menzies, who has worked on plays such as Top Hat and Tell me on a Sunday.

This year saw two winners from the Drama Centre, along with other successful students from the Academy of Live and Recorded Arts, Central School of Speech and Drama, Mountview, RADA and others.

To find out more information about the Laurence Olivier bursaries, along with other financial schemes offered by SOLT such as The Carmen Silvera Bursary, visit http://www.solt.co.uk/bursaries.html