Star rating
*****
A sun-soaked Shakespeare that works as a great window to young children’s beginnings with the Bard.

At the particular performance I attended of The Winter’s Tale: re-imagined for everyone aged six and over, the sun was blazing down on an excitable audience of school students and young children with their parents at Regent’s Park Open Air Theatre. But I feel, even on a grey day, this ensemble’s energy would brighten any dampened crowd’s spirits.

Sometimes referred to as one of Shakespeare’s ‘problem plays’, The Winter’s Tale may not appear to be the most obvious choice for a young people’s adaptation. However, it showcases all that Shakespeare’s good at: drama, tragedy, love, rivalry, jealousy and comedy.

The performance began with the six ensemble members (three women and three men) entering the space ten minutes prior to when the play was due to begin, moving round the stage space and at times interacting with audience members. The cast members then went off stage to put on their first costumes and reappeared dressed for the opening.

The ensemble then proceeded to explain the plot of The Winter’s Tale in rhyme (it may have even been iambic pentameter – but I was too slow to count the beats!) and introduced the audience to the characters they would be playing. I’ve reviewed a couple of adaptations of Shakespeare’s work for young people, including the work of Tim Crouch at the RSC, but I haven’t seen this kind of device used before. It worked brilliantly – it avoided any confusion, and not only made clear the relationships between the characters, but, for younger children perhaps not too familiar with theatrical devices, it also laid clear the multiroling  taking place.

This straightforward, hit-the-nail-on-the-head introduction then led in to a great Shakespearean production – while accessible to children with added laughs, overplaying and accessories (including a motorised mobility scooter dressed as a boat), it retained Shakespeare’s written word and authenticity. A special mention must go to Sirine Saba, who portrayed Hermione and Autolycus, who gave both a touching  performance as the Queen and bounced energetically across the stage as Autolycus.

The second half of the play was much more interactive, involving singing, dancing and audience participation. There were many eager young children replicating the dance moves at instruction, while slightly older almost-teenage school students sat very still!

Director Ria Parr, who previously directed a young people’s production of King Lear at the Young Vic, gets the mix of authenticity and fun spot on. Watching this reminds me what Shakespeare’s all about – we may hold Shakespeare up in high esteem, but ultimately he was a playwright who wanted to entertain. And sitting out in the hot sun with the other ‘groundlings’, it was lovely to watch young people get involved and excited about theatre written hundreds of years ago.

The Winter’s Tale re-imagined for everyone aged six and over runs until 20 July. For more information about the play and other productions in Regent’s Park Open Air Theatre’s 2013 season, visit http://openairtheatre.com. 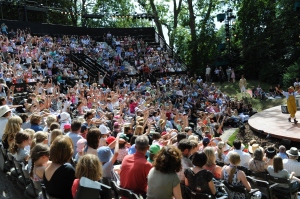 Regent’s Park Open Air Theatre is running a set of in-school workshops for primary-age students to accompany their latest production The Winter’s Tale re-imagined for everyone aged six and over.

The play, running from 29 June to 20 July at Regent’s Park, is a condensed version of Shakespeare’s original text, using music, movement, storytelling and visual elements to engage young audience members. The production has been directed by Ria Parr, who has previously directed a young people’s production of King Lear at the Young Vic.

The workshops have been devised by Sarah Gordon, artistic director of the Young Shakespeare Company. The sessions introduce young students to The Winter’s Tale’s story and characters, as well as to Shakespeare’s language. The workshop’s content is applicable to literacy and creative arts in the curriculum.

The sessions are suitable for primary students in Years 3 to 6, and take place before students see the production, available to book between 10–28 June. An education resource pack is available for teachers to download from the Regent’s Park Open Air Theatre’s website before the workshop.

To book, call 0845 673 2151 or email education@openairtheatre.com. For more information about The Winter’s Tale re-imagined for everyone aged six and over and other productions in Regent’s Park Open Air Theatre’s 2013 season, visit http://openairtheatre.com.