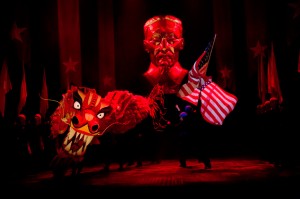 Following its return to the West End 25 years after its London premiere, Miss Saigon came away as the big winner of the WhatsOnStage Awards, sweeping the board with nine prizes. The cast of the Sir Cameron Mackintosh hit stole the category for acting in a musical with awards for best actor, best actress, best supporting actor and best supporting actress.

Another of the evening’s top winners was also a revival: Donmar Warehouse’s Coriolanus, which scored a hat-trick with best play revival, best lighting design from Mark Henderson and best supporting actor in a play for Mark Gatiss.

Coriolanus lead Tom Hiddleston was beaten to the prize for best actor in a play by David Tennant for his performance in the RSC’s Richard II. Tennant’s former Doctor Who co-star Billie Piper fought off tough competition from Gillian Anderson and Imelda Staunton to be named best actress in a play for her turn as Paige Britain in the National Theatre’s phone-hacking play Great Britain.

West End newcomers Shakespeare in Love and Memphis the Musical were both recognised presented with best new play and best new musical respectively.

Eton College has a prestigious reputation for producing Britain’s politicians and diplomats, but there are an increasing amount of British stage and screen stars that are coming through those infamous Eton doors. With a 400 seat main theatre, along with two studio spaces on the school’s premises, it’s no surprise Eton college students get a taste for drama during their time there. Each year the school has a director-in-residence to oversee the 8 or 9 house productions performed by the students.

Most recently the big names emerging from Eton have been, Henry Faber, Harry Lloyd, Tom Hiddleston and Eddie Redmayne. Other members of the Eton alumni have their work cut out for them to keep up with rising star Eddie Redmayne who has started off the new year with roles in some of the most talked about dramas, both on stage and on screen. Redmayne has most recently appeared in the BBC’s adaptation of novel Birdsong. He also had the lead role in the Oscar nominated film My Week with Marilyn along with fellow Eton attendee Dominic West.

At the Critic’s Circle Theatre Awards this month, Eddie Redmayne walked away with the prize for Best Shakespearean Performance for his role in Richard II at the Donmar Warehouse, which is sold out until the end of its run in February, after which, Redmayne will work on a film version of the West End favourite Les Miserables.

Redmayne’s fellow classmates are also having their own fair share of success; Tom Hiddleston will also be venturing into Shakespeare, filming a television version of Henry IV. He appeared in Woody Allen’s acclaimed Midnight in Paris last year and currently can be seen in Steven Spielberg’s adaptation of the acclaimed War Horse. Harry Lloyd is also appearing at cinemas around the country, starring in the Margaret Thatcher biopic The Iron Lady. Lloyd and Henry Faber will also star alongside Hiddleston in Henry IV.