While this summer looks to be dominated by sport, those with an appetite for theatre won’t be disappointed. It was predicted by theatre bigwigs such as Andrew Lloyd Webber 2012 would see theatre’s struggle against the tide of Olympic tourists. However, there are a couple of initiatives which are making London’s biggest theatre hits more available to everyone.

One scheme which will keep children happy throughout the summer holidays is Kids Week. The project, in its 15th year, will run throughout the whole of August – providing parents and children with a respite from the Olympic Games.

The scheme allows young people under the age of 16 to see a theatre performance in London for free, when attending with a paying adult. Amongst this year’s selection of performances are Billy Elliot the Musical, Blood Brothers, Chicago, War Horse, The Lion King, The Wizard of Oz and many more. Tickets went on sale on 12th June and saw popular show Matilda The Musical sell out within hours.

Young people who have bought a ticket through Kids Week also have the chance to take part in a workshop from their chosen play. Those attending Singin’ in the Rain can opt to have a go at a vocal and dance workshop for free. Visitors to The Woman in Black can participate in an interactive ghostly workshop and many other productions are offering Q&A sessions with Kids Week audiences. For more information about Kids Week, visit www.kidsweek.co.uk. Tickets and workshops are subject to availability, so book soon to avoid disappointment.

However, if your budget is too tight to shell out for full price adult tickets, West End Live are offering a free weekend of London theatre performances for visitors to enjoy. The event, organised by Westminster City Council and the Society of London Theatre (SOLT), will see live showcase performances of London’s biggest theatre shows.

There will be performances from Shrek, Wicked, Ghost The Musical, Stomp and Phantom of the Opera. If you’ve missed out on tickets for Kids Week for shows like Matilda the Musical and Billy Elliot they will also be in attendance. The weekend will also see musical performances take place from acts such as the National Youth Music Theatre and Ghost The Musical star Mark Evans.

West End Live will take place on Saturday 23rd and Sunday 24th July. All performances will take place in Trafalgar Square and entry is free. To find out more, visit www.westendlive.co.uk.

Make sure you make the most of all that the West End has to offer this summer! 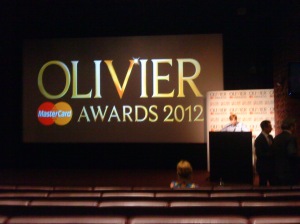 Teaching Drama was invited to The Mayfair Hotel by The Olivier Awards to hear them reveal this year’s nominees. 2011 winners, Nancy Carroll and Roger Allam, were in attendance to announce this year’s shortlist.

Ghost The Musical received five nods for categories in design and for best new musical. Singin’ In The Rain also came away with nods for best actress in a musical for Scarlett Strallen and best musical revival, where it will have to beat out Crazy for you, South Pacific and The Wizard of Oz.

James Cordon was nominated for best actor for The National’s One Man, Two Guvnors. He will have to battle it out for the title against big screen stars, Jonny Lee Miller for Frankenstein and Jude Law for Anna Christie. Celia Imrie, from Noises Off , has been nominated for best actress along with Kristin Scott Thomas for her role in Betrayal.

The Olivier Awards will take place on Sunday 15 April at the Royal Opera House. The ceremony will be available to watch through the BBC’s red button service and also broadcast on BBC Radio 2. The Olivier Awards have also organised a Covent Garden Piazza event. The public will be able to see performances from some of London’s shows and watch the ceremony unfold live on a big screen relay.

To watch the nominations, visit the webcast here.
For more information visit www.olivierawards.com